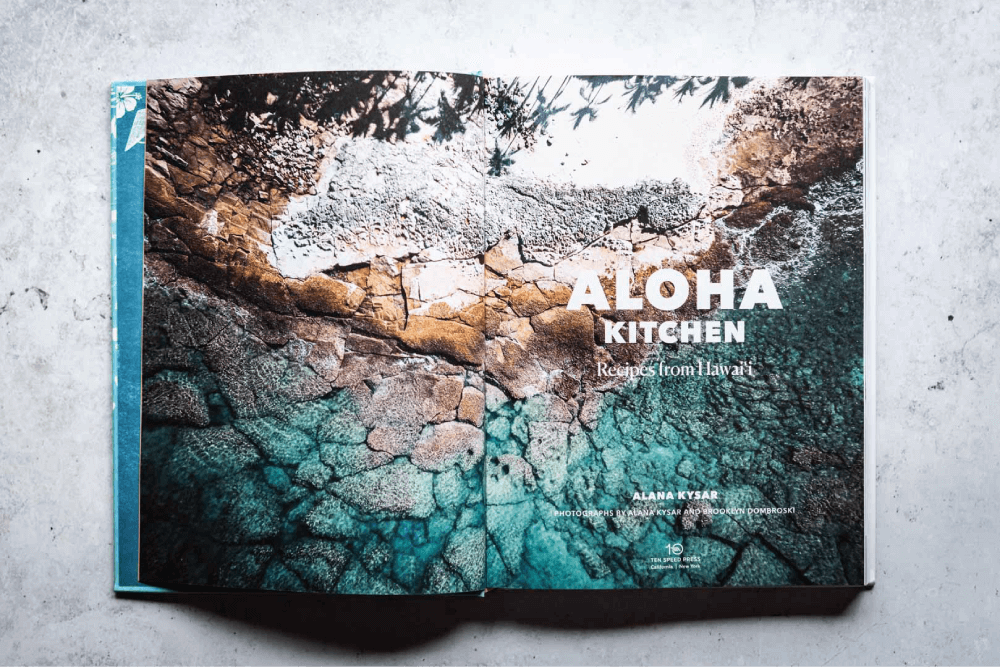 One of the reasons why we like cookbooks is because you can learn a lot about a culture, just by reading about their gastronomic traditions. For this reason, in this week cookbook review, we decided to explore Hawaiian cuisine, through the Aloha Kitchen Cookbook.

Alana Kysar, is the popular food blogger behind Aloha Kitchen. A gorgeous cookbook that reflects the major cultures that have influenced local Hawai’i food over time. A collection of recipes and photographs that portray the graciousness and natural beauty of the Aloha State. A mix between Native Hawaiian, Chinese, Japanese, Portuguese, Korean, Filipino and Western cultures.

A Journey Through Hawaiian Cuisine

In Aloha Kitchen, Alana takes you into the homes, restaurants, and farms of Hawai’i. Exploring the cultural and agricultural influences that have made dishes like plate lunch and poke crave-worthy culinary sensations. Interweaving regional history, local knowledge, and the aloha spirit, Alana introduces local staples like saimin, loco moco, shave ice, and shoyu chicken, tracing their geographic origin and history on the islands.

As a Maui native, Kysar’s roots inform deep insights on Hawai’s multiethnic culture and food history. In Aloha Kitchen, she shares recipes that Hawai’i locals have made their own, blending cultural influences to arrive at the rich tradition of local Hawai’i cuisine. With transporting photography, accessible recipes, and engaging writing, Kysar paints an intimate and enlightening portrait of Hawai’i and its cultural heritage.

Aloha Kitchen is a fascinating and visually stunning homage to Alana’s food heritage. A true mix of flavors, influenced by the differences cultures who have left their mark on the Hawaiian culture. Kysar takes care to respect these distinctions, marking each recipe with a symbol representing the ethnic group who inspired it.

Kysar’s use of the okina — the diacritical mark between the two i’s in the spelling of Hawai’i – further reinforce to her intention to remain true to her native culture from cover to cover. She uses a diagram of the ubiquitous Hawaiian plate lunch to explain this complex cultural melting pot, consisting of a protein, vegetable, carbohydrate such as rice, and a “mayo-y carbohydrate” like macaroni salad. These components inspire many of her recipes: Teriyaki Beef Sticks, Chicken Adobo, Kalua Pig. Most look easy to replicate at home, though some may require a trip to an Asian market for ingredients.

At The End Of Cake Aloha Kitchen Cookbook Review

Aloha Kitchen Cookbook brings you 85 fresh and sunny recipes from one of the most beautiful countries in the world. A book that reflects the major cultures that have influenced local Hawai’i food over time.

Aloha Kitchen Cookbook gives you the true taste of Hawaii through amazing recipes and astonishing photographs.