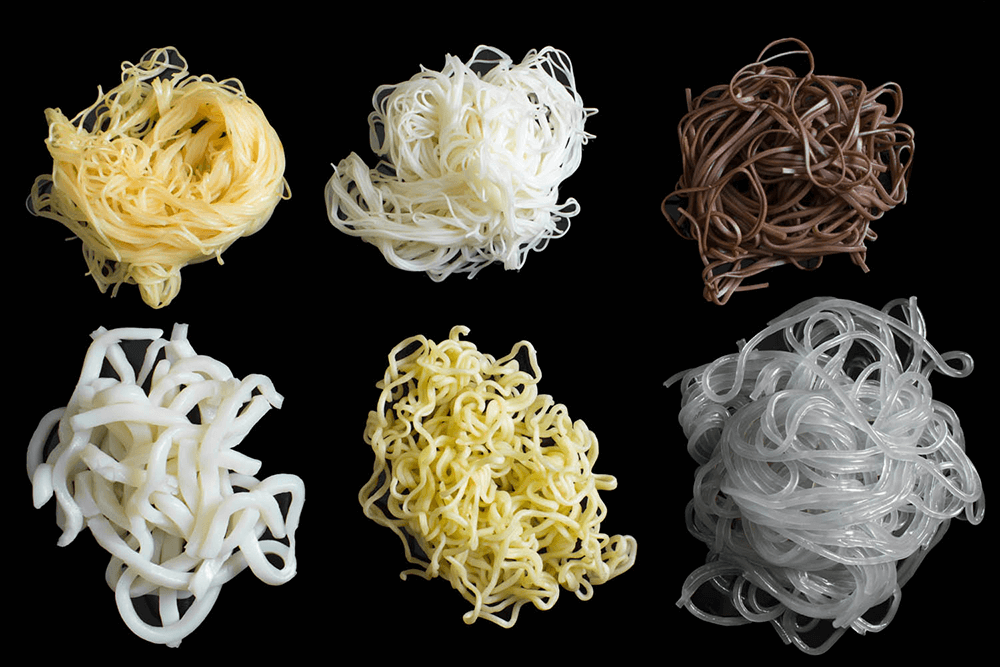 Japanese cuisine is well-known for having a variety of vibrant flavors. Depending on how the food is prepared, Japanese dishes can range from being light and healthy (in meals made with fresh-cut veggies and wholesome wheat flour for example) to super savory from miso garlic pork belly, Japanese beef, and other fresh ingredients.

Without further delays its time to show you our list of types of Japanese noodles:

The first dish in this list of types of Japanese noodles as to be ramen (ラーメン), a noodle soup dish which comes from China. This dish is perhaps the most famous of Japan’s many varieties of noodles. Characterized by its slim body, extended length, and often yellow color is made of wheat flour, salt, water, and kansui, or a form of alkaline water.

The noodles are served in a bowl with broth and are usually coupled with pork, bamboo shoots, soft-boiled eggs, and strips of seaweed. There are different styles of ramen and each region in Japan have their own version.

Tonkotsu soup is usually cloudy white colored and is a thick broth made from pork bones.

Shoyu ramen is a basic soup with clear brown broth, made with some type of stock and plenty of soy sauce. Menma, or marinated bamboo shoots are common for toppings, as is green onions, kamaboko, boiled eggs, and bean sprouts.

Shio ramen is a little lighter in color, a yellowish broth made with salt and broth. The flavor is lighter as well and the soup generally uses straight noodles rather than curly ones.

Miso ramen is also popular, especially famous in Hokkaido, and may use butter and corn, cabbage, sesame seeds, and garlic.

Udon (うどん) noodles are the thickest of the Japanese noodles. Chewy and soft, these thick wheat noodles are usually pale white by comparison to ramen. With a neutral flavor, this dish is the most versatile among all the noodle dishes because of the many possibilities you can do to tweak your order. Tempura, boiled eggs, and karaage (Japanese fried chicken) are usually paired with this dish and is arguably the cheapest among all the other noodle types on this list.

Kitsune Udon is a dish with aburaage, a thin slice of deep-fried bean curd.

Tsukimi Udon is a very simple udon dish topped with a raw egg.

Curry Udon is a mix of udon noodles and Japanese curry.

Tempura Udon consists of udon noodles topped with tempura and served with a hot broth.

Somen (素麺, そうめん) are very thin white wheat flour noodles, usually served cold. Popular especially in the summertime. Usually, it is served in a very simple style, chilled in ice after cooking and dipped in tsuyu, usually a katsuobushi-based sauce with some onion, ginger or myoga.

There is a unique tradition in Japan associated with somen. “Nagashi Somen”, or act of catching somen noodles that are flowing in the water through bamboo gutter with chopsticks, and dipping them into the cool broth before eating.

The next dish in our list of types of Japanese noodles is hiyamugi (冷麦, ひやむぎ) noodles. A little thicker than sōmen and thinner than udon, these noodles are similar to both and somewhere in between the two in size. It is served in similar manners as sōmen or udon. Sometimes they are not only white but mixed with pink or green colored noodles.

Soba (蕎麦, そば) are spaghetti-like noodles made from buckwheat and are either served hot, or cold. This dish, unlike other seasonal noodle dishes, is available all throughout the year because of the abundance of buckwheat, which can be harvested multiple times a year.

Many soba variations are similar to udon ranging from chilled to served in a soup.

Soba Maki is a variant on sushi with Soba noodles wrapped in seaweed.

Tsukimi Soba is served with a hot broth and complete with an egg topping.

In the sixth position in our list of types of Japanese noodles is a noodle called yakisoba (焼きそば, やきそば). Although it contains the word soba, is not made with buckwheat noodles but wheat flour noodles that are stir-fried.

Yakisoba noodles have no broth and are stir-fried and topped with meat, vegetables, and other garnishes such as mayonnaise, seaweed powder, pickled ginger, and fish flakes. These noodles are usually served and easily found in food stalls during festivals.

Shirataki noodles (白滝, しらたき) is a popular dish outside of Japan because it’s considered a weight-loss food (due to its lack of calories). Made from konjac yam, these noodles are usually sold in packets with a liquid that is drained before the noodles are used. Shirataki are generally used to complement other dishes because it has little flavor of its own and thus, are found in soups and nabe hot pots.

Although the shirataki noodles can be prepared in similar ways as other noodles, traditionally they are most commonly used in sukiyaki, nikujyaga, and other stewed dishes.

Harusame with pork is a famous a stir-fry that goes great as a side dish or soup.